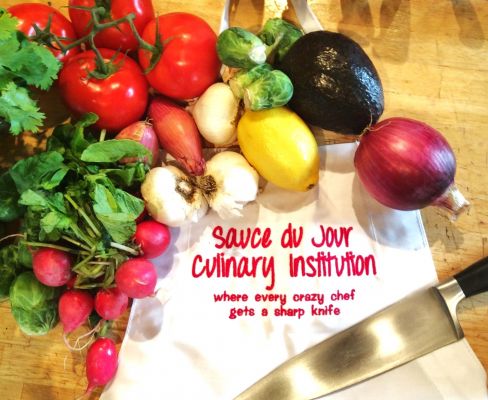 For the Beer Cooking Class -112

This Tomato Jam gets it's smoky goodness from the smoked porter beer and some smoky chipotles. It is a FABULOUS addition to a burger or any sandwich, for that matter. A batch will keep for several days, even weeks in the refrigerator.

Heat olive oil over medium heat in a sauce pan. Add onions and cook until translucent, about 3-4 minutes. Add the garlic and cook one more minute.

Deglaze the pan with the beer and apple cider vinegar. Reduce just slightly, about a minute or two.

Stir in the tomatoes, brown sugar, cinnamon stick, chipotle pepper, and salt. Bring to a boil and let boil for about a minute then reduce to a simmer. Set a lid over about 3/4 of the pan so that the steam can escape. Stir occasionally (reduce heat if necessary so that tomato jam doesn’t stick to the pan).

Simmer about 40 minutes, or until most of the liquid has evaporated and that when you drag a spoon through the jam it holds the line.

Discard cinnamon stick. Let cool completely, salt and pepper to taste. Serve with burgers or grilled cheese sandwich. Can be made ahead, stores well in the refrigerator for several days.