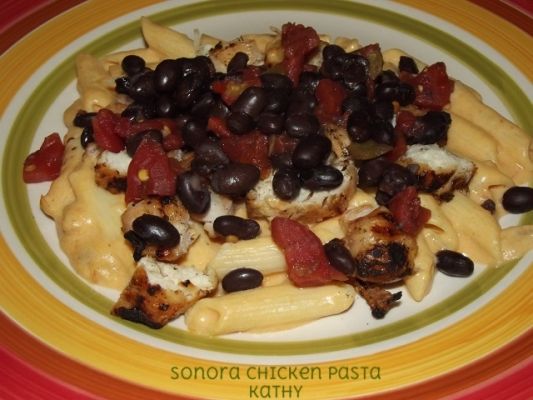 This recipe is the 1st recipe that Joyce (Sassygrits___OH) ever posted for me on TOH and the beginning of our great friendship! I miss her so much! The meaning of Sonora in Spanish is "Pleasant Sounding" Sonora is not popular in the USA!

I loved Ruby Tuesday Sonora Chicken Pasta and they took it off of their menu several years ago! I would order it every time we visited Ruby Tuesday! I was crushed when it disappeared from the menu! There was only one thing to do and that was to find a copycat recipe! So now it has re-appeared on their menu but it isn't the same! I make this copycat recipe much better than their creation of it now as of 2016!

The directions stated that the cheese sauce would come out like honey but mine didn't! Mine was more like the thickness of mac and cheese but it was delicious! I would of liked it to be a tad thinner so next time I may thin it out with some more half and half!

The topping of black beans and Rotel tomatoes are just like Ruby Tuesday! Man, that stuff is awesome good so don't skip the topping! I think it's what makes this dish!

Season both sides of chicken with cracked black pepper and seasoned salt and rub into meat. Fry in skillet with a little extra virgin olive oil until tender and lightly browned.

In a sauce pan warm black beans and diced tomatoes. In a seperate pot, boil noodles and drain.

Make cheese sauce. (directions below) After cheese sauce is made add it to the noodles and add chicken after cutting it into chunks. Mix well.

After meal is plated, spoon bean and tomato mixture over chicken and pasta mix.

Melt butter or margarine in a saucepan and add onion and garlic. Saute until onion is transparent. Stir in the flour to make a roux and cook for 5 minutes, stirring often.

Mix the hot water, chicken stock, and half-and-half. Add mixture slowly to roux, stirring constantly. Allow to cook 5 minutes. Sauce should have the consistency of honey).

Add salt, sugar, hot sauce, lemon juice, cayenne, and parmesan cheese to sauce. Stir to blend. Do not allow to boil. Add Velveeta to sauce and stir until melted. Add salsa and sour cream to sauce and blend.