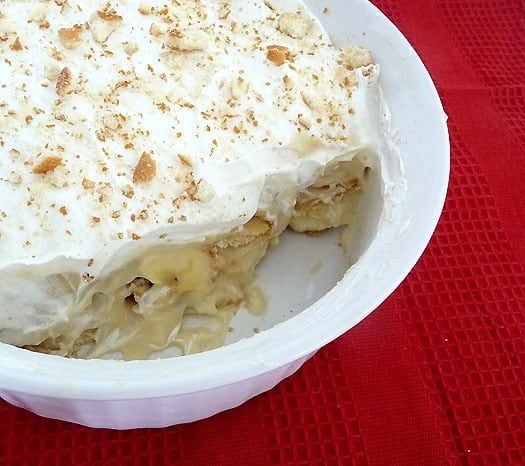 1. Heat the milk, sugar and salt in a medium saucepan over medium heat until simmering, stirring occasionally to dissolve the sugar. Meanwhile, whisk the egg and yolk in a medium bowl until thoroughly combined. Whisk in the cornstarch until combined and the mixture is pale yellow and thick, about 20 seconds.

2. When the milk mixture reaches a full simmer, gradually whisk the simmering mixture into the egg mixture to temper. Return the mixture to the saucepan, scraping the bowl with a rubber spatula; return to a simmer over medium heat, whisking constantly, until a few bubbles burst on the surface and the mixture is thickened and glossy, about 30 seconds. Off the heat, whisk in the butter and vanilla.

3. Strain the pudding through a fine-mesh sieve set over a medium bowl. Place plastic wrap directly on the surface of the pudding to keep a skin from forming.

4. Line the bottom of a 1½-quart serving dish with vanilla wafers. On top of the wafers, place a layer of the sliced bananas. Pour ½ of the pudding over the bananas, and spread to the edges of the dish. Repeat the vanilla wafers, bananas, and pudding again. Press plastic wrap against the surface of the pudding and refrigerate for at least 4 hours.

5. When ready to serve, whip the heavy cream with the powdered sugar and vanilla until soft peaks form. Spread on top of the pudding and top with crushed vanilla wafers. Store leftovers in the refrigerator.

pattit
This is the ONLY way to make banana pudding. I hate all the shortcuts people make now a days. This is one of my favorite desserts!