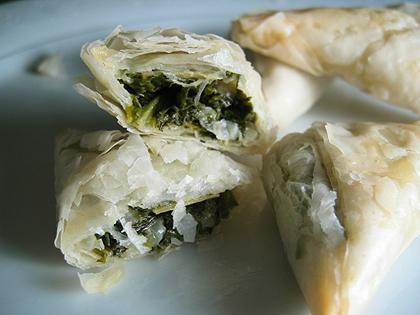 Thaw 10 oz. frozen chopped spinach, drain, then squeeze to get out as much water as possible.

If you want to cook and chop your own spinach, go ahead, but I don't know how much fresh spinach you have to buy to make 10 oz. Too much math.

In a large bowl, mix together spinach, 6 to 8 oz. crumbled feta cheese, 2 to 4 tablespoons grated parmesan cheese, and about 5 turns on your black pepper mill. Okay, so I admit, I lost my pepper mill on a move, so several dashes black pepper to taste is fine.

No need for salt since both the cheeses are salty enough. The cheese amounts are a range because it depends on how much cheese you like, but that's just silly anyway, because you should always use more cheese!

Unfold phyllo dough that has been thawed and put a damp (not wet) paper towel over it to keep it from drying out.

Looking carefully because they are thin and might be stuck together, take one sheet of phyllo and place it on the work surface in front of you (mine was an impeccably clean tabletop).

This is also a range, since phyllo sheets come in different widths, and you should make them wide enough that you use the whole sheet.

Take one buttered phyllo strip and place a tiny dollop of the spinach filling at one end.

Don't get greedy. If there's too much, the filling will burst through the pyhllo when it bakes, and though oozing spinach and cheese is never a bad thing, it doesn't look very pretty.

Starting at the spinach end, fold the edge of the phyllo across the filling, the fold back and forth up the phyllo strip as if you were folding a flag.

Repeat, until all your dough or your spinach filling is used up, whichever comes first.

No need for butter, since there is a lot of butter on the phyllo. Brush the tops of the triangles with more butter, then bake in a pre-heated 350 degree oven until golden brown and flaky, about 20 minutes.

Resist the temptation to pop one as soon as it comes out of the oven.

Trust me, I burned my mouth on the filling.

ElizabethP4
I just had a couple suggestions if you want to try something a little different... If you add about a teaspoon or so of grated lemon peel and a pinch of nutmeg, it adds great flavor to these! But definitely delicious as is, as well.