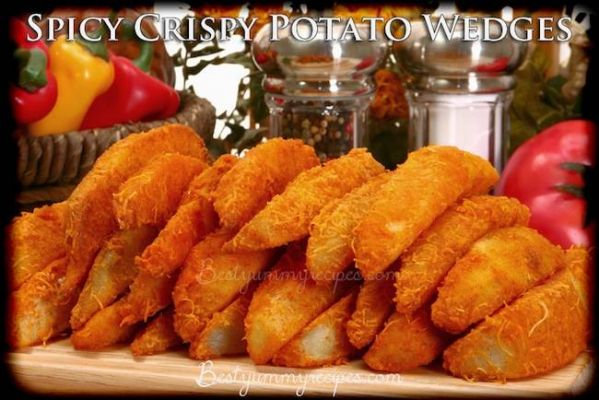 From Yummy's notes "Spicy Crispy Potato Wedges. Potato wedges are a variation of french fries. As their name suggests, they are wedges of potatoes, often large and unpeeled, that are either baked or fried. They are sold at diners and fast food restaurants.

In some regions of the United States, potato wedges are known as jojos. This term originated in Elyria, Ohio and is also used in the Pacific Northwest, Ohio, Minnesota, Texas, and other areas. Jojos are potato wedges fried in the same vat as chicken and usually eaten plain alongside fried chicken, cole slaw, and baked beans. A variation in spelling and pronunciation is mojos, particularly in Western Canada, the Western United States and Canada’s Yukon.

In Australia, potato wedges are a common bar food, that are almost always served with a mixture of sour cream and sweet chilli sauce."

Turn oven on to 450 degreesF; grease pan. Slice the potatoes in half lengthwise on a cutting board.

Cut each lengthwise half into 4 pieces to make a total of 8 wedges for each potato or 16 total.

Put the wedges in the pan and spread them to make a single layer.

Brush the melted butter over the potatoes.

Combine the 4 seasonings in a small dish and mix well.

Sprinkle mixture over the potatoes. (Be generous)

Put the crumbs and shaved parmesan cheese into a plastic bag and coat each potato with the crumb mixture. Please they are well covered with bread and cheese

Bake on center rack for 30 minutes.

Place the potatoes on a cooking sheet in a single layer.

Take them out after 30 minutes and turn over the potatoes.

Bake for 10 more minutes or until crispy and golden brown.