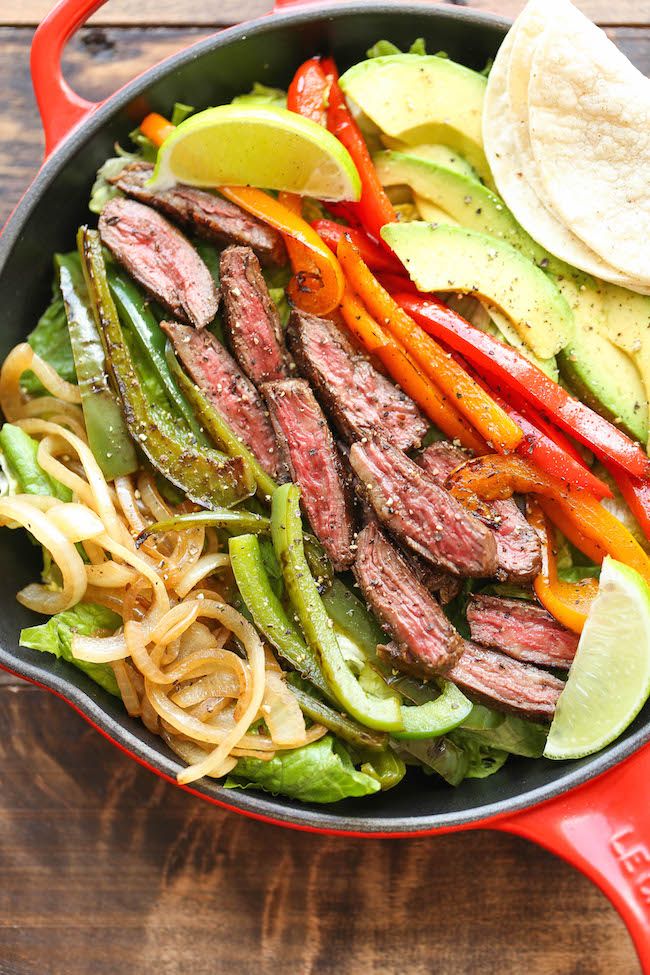 All the amazing flavors of a fajita conveniently in a hearty salad, served with the creamiest cilantro lime dressing!

To make the cilantro lime dressing, combine cilantro, sour cream, mayonnaise, garlic, lime juice and salt in the bowl of a food processor. With the motor running, add olive oil and vinegar in a slow stream until emulsified; set aside.
To make the steak, whisk together olive oil, garlic, lime juice, cumin, chili powder, oregano and onion powder in a small bowl; season with salt and pepper, to taste.
In a gallon size Ziploc bag or large bowl, combine steak and marinade; marinate for at least 30 minutes, turning the bag occasionally. Drain the steak from the marinade, discarding the marinade.
Heat 1 tablespoon olive oil in a grill pan over medium high heat. Working in batches, cook steak, flipping once, to preferred temperature, about 3-4 minutes per side for medium rare. Remove from heat and let rest for 10 minutes before thinly slicing against the grain.
Add onion to the skillet, and cook, stirring often, until onions have become translucent and slightly caramelized, about 7-8 minutes; set aside.
Heat remaining 1 tablespoon olive oil in the skillet. Add bell peppers, and cook, stirring often, until soft and slightly caramelized, about 8-10 minutes; set aside.
To assemble the salad, place romaine lettuce in a large bowl; top with arranged rows of onion, peppers, steak and avocado.
Serve immediately with cilantro lime dressing.