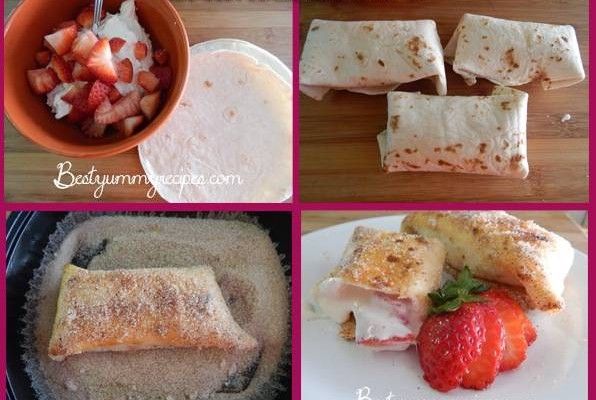 n the bowl of a stand mixer fitted with the paddle attachment, beat the cream cheese with the sour cream, 1 tablespoon sugar, vanilla extract and lemon zest, scraping down the sides of the bowl as needed. Fold in 3/4 cup of the sliced strawberries.

Divide the mixture evenly between the tortillas, slathering each portion in the lower third of each tortilla. Next, fold the two sides of each tortilla toward the center and then roll the tortilla up like a burrito and secure it with a toothpick. Repeat the rolling process with the remaining tortillas.

Combine the remaining 1/4 cup sugar with the cinnamon in a shallow bowl and set it aside. Line a large plate with paper towels.

Add 3 inches of oil to a large, deep saucepan, leaving a minimum of 2 inches from the top of the oil to the top of the saucepan. Heat the oil over medium-high heat until it reaches 360ºF on a deep-fry thermometer.

Working in batches, fry the chimichangas until golden brown and crispy, about 3 minutes, flipping them as needed. Transfer the chimichangas to the paper towel-lined plate to drain for 1 minute, and then roll them in the cinnamon and sugar mixture. Repeat the frying and rolling process with the remaining chimichangas, returning the oil to 360ºF between batches.

Remove all toothpicks from the chimichangas and transfer them to serving plates. Top each with a portion of the remaining 1 cup of sliced strawberries and serve immediately.