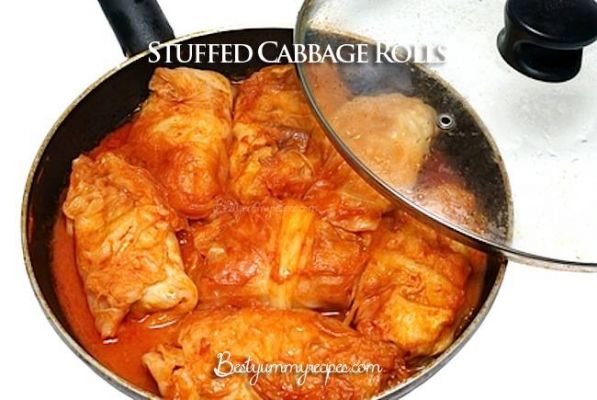 Per Yummy: A cabbage roll (also stuffed cabbage or pigs in a blanket) is a dish consisting of cooked cabbage leaves wrapped around a variety of fillings. It is common to the ethnic cuisines of the Balkans, as well as other parts of Europe such as Finland and Sweden, and the Middle East.

In Europe, the filling is traditionally based around meat, often beef, lamb, or pork and is seasoned with garlic, onion, and spices. Grains such as rice and barley, eggs, mushrooms, and vegetables are often included. Pickled cabbage leaves are often used for wrapping, particularly in Southeastern Europe. In Asia, seafoods, tofu and shiitake mushroom may also be used and Chinese cabbage is often used as a wrapping.

Cabbage leaves are stuffed with the filling which are then baked, simmered or steamed in a covered pot and generally eaten warm, often accompanied with a sauce. The sauce varies widely by cuisine. Always in Sweden and sometimes in Finland, stuffed cabbage is served with lingonberry jam, which is both sweet and tart. In Eastern Europe, tomato-based sauces or plain sour cream are typical. In Lebanon it is a popular plate, where the cabbage is stuffed with rice and minced meat and only rolled to the size of cigar. It is usually served with a side of yogurt and a type of lemon and olive oil vinaigrette seasoned with garlic and dried mint.

Popular among European Jews, and traditionally served on Simchat Torah, stuffed cabbage is described by Gil Marks to have entered Jewish cooking some 2,000 years ago. Recipes vary among Jewish communities depending on region; Romanians and northern Poles prefer a savory sauce, while Jews from Galicia and Ukraine favor sweet-and-sour, for example.

Cabbage leaves filled with ground beef and rice are simmered in tomato soup for this Polish-inspired favorite.

1. In a medium saucepan, bring water to a boil. Add rice and stir. Reduce heat, cover and simmer for 20 minutes.

2. Bring a large, wide saucepan of lightly salted water to a boil. Add cabbage leaves and cook for 2 to 4 minutes or until softened; drain.

4. Divide the beef mixture evenly among the cabbage leaves. Roll and secure them with toothpicks or string.

5. In a large skillet over medium heat, place the cabbage rolls and pour the remaining tomato soup over the top. Cover and bring to a boil. Reduce heat to low and simmer for about 40 minutes, stirring and basting with the liquid often.