By spryte
Member since 2008 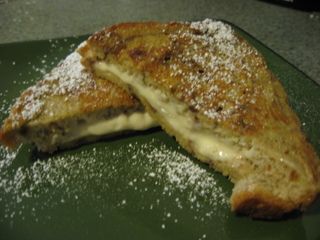 I typically like a nice savory breakfast, but last Sunday, I wanted something sweet. This is what I came up with!

With an electric beater, mix together cream cheese, 1 tsp vanilla and sugar.

Spread each one with with a quarter of the cream cheese mixture.

Then spread with raspberry jam (I thought of this while I was eating it. I'll do it next time!)

Dip each sandwich into egg mixture.

Melt a little butter in a skillet.

Cook other sides until golden brown.

Sprinkle with powdered sugar and enjoy!