By Our Little Farm
Member since 2012 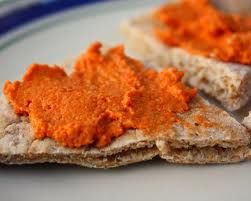 Served in Syria and Turkey where it is known as Muhammara, this garlicky, walnut spread is typically served with wedges of fried pita bread or ice-cold lettuce spears as an appetizer. Muhammara also makes for a flavorful sandwich spread. For best results, make this dip a day ahead to let the flavors mellow and blend. Keeps in the fridge for up to one week.

1) OVEN: Preheat oven to 425 F. Lay the whole peppers in a baking tray, and put in the upper third of the oven. Roast the peppers for about 25 minutes in all. After 10 min, turn the peppers over. Continue to roast, turning the peppers a little bit every 5 min, or until the sides are roasted evenly. Take the tray out of the oven and cover with a dish towel for 10 min.

2) BBQ or GAS BURNER: Roast peppers over a gas burner until blackened all over, turning with tongs as each side is blistered. Transfer to a bowl, and cover with plastic wrap; let stand about 15 minutes. Peel, and discard skins, stems, and seeds. Set peppers aside.

Bring small saucepan of water to a boil. Skewer the 2 cloves of garlic and lower into water. Boil about 45 seconds. Immediately put under cold water to stop the cooking. Peel and coarsely chop.

Blend all ingredients in a food processor until a coarse puree forms. Season with salt to taste. Makes about 2 cups. Keep covered in refrigerator for up to 1 week.