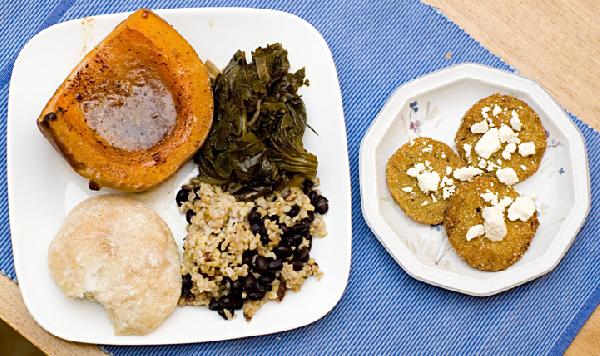 Several friends and family members have told me lately they are surprised by how often I cook collard greens (one type of braising greens), as their experiences with collard greens have been entirely negative. I never liked collard greens–which are a Southern tradition–as a child, but I realized when I tried them a couple of years ago that they have grown on me. Plus, they are full of antioxidants, and they are a winter staple in Georgia produce. The trick, for me, has been figuring out a way to cook them that doesn’t involve loads of pork fat but still cuts the natural bitterness of the greens. (I realize some Southern cooks will tell you that you can’t make collards without pork fat, but I would like to live to see my grandchildren.)

Here is the recipe I’ve developed for collard greens. My husband liked it so much he didn’t realize it was the same food I’ve fed him several times before, just with some different seasoning. Ha.

Clean the collard greens thoroughly; they take much more washing than you would expect. Any dirt you miss will be very gritty in the final product. Some people say to put them in a bowl of water and swish the dirt off, dump that water out, and then repeat that several times. I’m always surprised by how dirt clings to them so stubbornly. I honestly might have given up on making them (or at least would have relegated them to a weekend-only food) if we hadn’t been able to start getting pre-washed collard greens at our farmer’s market on Saturdays.

Chop your greens into smaller pieces.

Put the olive oil in the bottom of a very large, preferably non-stick pot. (I use our biggest pot, because the greens take up so much space before they are cooked.) Heat on medium-high heat until the oil is hot; then cook the onion pieces in the oil until they soften some. Turn the heat down to medium.

Toss in the chili powder, Bragg’s, Worcestershire sauce, and molasses, and stir around. Pour in the dark beer, and stir it all together. Stir the collard greens into the pot, and then add broth until the greens are just barely (or even mostly) covered. Turn the heat down to medium-low and let them simmer, uncovered, for 30-40 minutes, stirring occasionally.

Notes: Collard greens--if you cook them with the tough ribs of the leaves left in them--have to cook at least ~30 minutes to be digestible. Undercooked greens are very tough to chew–like eating leaves, which I guess they actually are! Some people cook collard greens for hours–until they are really mushy–but I prefer to leave them more firm than that.Most restaurants serve collard greens with vinegar added to them. I obviously can’t eat them that way. The other common accoutrement is hot pepper sauce, which we also don’t use, though I think my husband would like them with that.

TRobertsen
This was superb!!!! For lack of provisions I substituted light beer for dark, and brown sugar for molasses; also added a can of petite diced tomatoes. Highly recommended. Thank you.
CarleeRows
Whoa! This is a great recipe. Although I'm a fan of tried and true collards, this is a successful venture outside of the box! I made it with Highland's Oatmeal Porter and served with Mark Bittman's Molasses Whole Wheat bread.