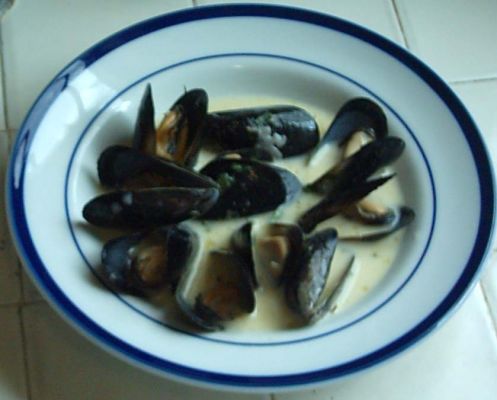 nine times out of ten, when I make mussels, they're steamed in some sort of alcohol, be it white wine or tequila (trust me on that last one). But when I don't use any alcohol, I'll make a Thai-inspired dish. This recipe is by no means traditional or set in stone - just consider it a guideline. Thai (and many southeast Asian culinary cultures) dishes are all about balancing the flavors in a dish, so in every bite you get a major complex flavor that's sweet and salty and savory and pungent and silky and pretty much ever other good thing you can think of.

Heat 1 tbsp of canola or peanut oil in a saucepan. Once hot, add garlic, ginger, chiles and half the chopped cilantro. Season with salt and sweat, until the mix is fragrant and is softening but hasn’t taken on any color, about two minutes. Add the Thai green curry paste and cook, briefly, to release the aroma, 30 seconds or so. Add the coconut milk, broth or water, lime juice, lemongrass, kaffir lime leaves, and the fish sauce. Bring to a boil, then reduce and let the mixture simmer gently, uncovered, for 10-15 minutes, until the flavors have blended but the mixture has barely reduced. Remove from heat; strain through a fine-mesh strainer or cheesecloth into a clean bowl.

While the coconut broth is simmering, rinse the mussels under cold running water. If any mussels are open, tap them gently; they should close up within a few seconds. If they do not, discard them – they are dead and should not be cooked.

Heat a large skillet over medium-high heat. Add 1 tbsp of peanut or canola oil and swirl to coat. Add the mussels and shake to arrange in a single layer. Let the residual water from their shells evaporate, 15-20 seconds, then pour in the coconut broth. Bring to a boil, reduce to a simmer, then cover and cook, shaking the pan occasionally, for 5-7 minutes, or until the mussels have opened.

Remove from heat. Ladle the mussels and broth into a serving tureen or individual bowls, discarding any mussels that did not open during cooking. Sprinkle with remaining chopped cilantro. Serve with steamed white rice.

NOTES: I like to make it all about the mussels and the broth, so I don't include anything else in the final dish, but if you like, sweating some Asian-style vegetables before the mussels go in would be nice. Eggplant, or bok choy, something like that.

Some ingredients you may not be able to find where you are, though all are becoming more available. However, I don't keep certain things in the house, and I won't go buy it for one recipe, so feel free to substitute or leave it out. Thai bird chiles are tiny and hot, but any small red chile will do. No fish sauce? Just a dash of Worcestershire - for the salt and the sour, but the flavor is very different, so don't go heavy. No lemongrass? Use lemon zest instead - not the same, no, but a decent substitute. Kaffir lime leaves add a nice, indefinable aroma, but you can skip them. Likewise with the Thai curries. I usually prefer green, as it's just as hot as red but has a more pronounced sweetness to it. Red - or even yellow - would be good, too, but if you don't have it and can't find it, leave it out. The resulting dish will have a cleaner flavor.