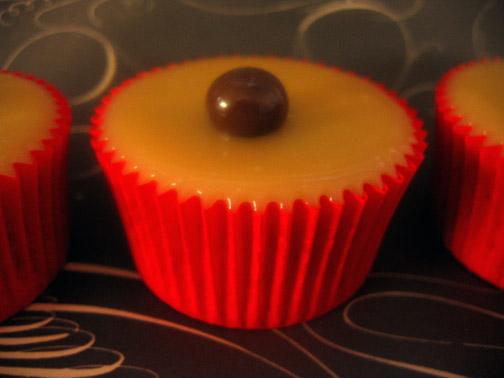 My sister Nina loves chai, so I wanted to make her a sweet and spicy cupcake that captured that chai essence, but I've made the same chai cupcakes a bazillion times, and I wanted to do something new this time. So, instead of using chai tea in this recipe from 125 Best Cupcake Recipes by Julie Hasson, I used a bag of Thai sweet coconut tea, which is a blend of black tea, coconut essence, cardamom, black pepper, paprika and clove. It tastes like heaven when you top it with steamed milk and a little honey, so I figured in cupcake form it had to be good. I actually called my husband for advice on the topping. I was thinking cinnamon buttercream, and after the mess I made making homemade caramel, I think that might have been the way to go. But, these don't look, taste or smell like your average cupcake, so why top them like your average cupcake? Honey buttercream might have been another delicious option. If you'd like to make chai cupcakes rather than this particular flavor, substitute a bag of your favorite chai tea, or grind some loose chai tea and use about a teaspoon.

Preheat your oven to 350 degrees and line a cupcake pan with paper liners.

In a bowl, mix flour, baking powder, baking soda, cardamom, allspice, salt and contents of tea bag.In a large bowl, using an electric mixer, beat together sugar and butter until well combined. Add egg whites, one at a time, beating well after each addition. Mix in vanilla. Alternately beat in flour mixture and buttermilk, making three additions of flour mixture and two of buttermilk, beating until smooth.

Scoop batter into prepared pan, bake 20-25 minutes or until top springs back when lightly touched.

Let cool in pan for 10 minutes, then remove from pan and cool completely on wire rack.