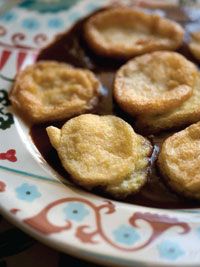 Don’t let the lack of familiarity or the simplicity of this dish cause you to pass it by. Also, don’t confuse it with Mexican tortas, which are typically sandwiches. These light, crispy egg fritters are a Jaramillo family favorite. Steeped in tradition, the tortas are common in northern New Mexico households during Lent, when meat is avoided. The tortas also appear on Easter menus because of eggs’ association with new life.

For centuries, farmers in Chimayó have grown a particular “landrace” of chile, different from other versions just a valley over, and a good bit different in appearance from the hybridized large chiles from southern New Mexico. The true Chimayó pods grown historically in the area are small and wrinkly and not easily roasted and peeled in their green state. The lean soil and cool nights of the area keep the chiles from growing to a hefty size, but when left to mature to red, the local pods develop an incomparable sweetness and mellowness. Coupled with a small crop, these characteristics make red Chimayó chiles pricier and more sought after than chiles from anywhere else. This meatless version of the red sauce is especially popular at Rancho de Chimayó during Lent.

These recipes are from the upcoming The Rancho de Chimayó Cookbook: 50th Anniversary Edition, by Cheryl Alters Jamison and Bill Jamison (© 2014, Lyons Press, an imprint of Globe Pequot Press).

Separate eggs, dropping whites into a medium-size non-plastic mixing bowl and placing yolks in a small bowl. Mix yolks lightly with a fork or whisk. Stir in flour, baking powder, and salt and set aside. Beat egg whites with a mixer at high speed until stiff. Gently fold egg yolk mixture into egg whites.

Lay several thicknesses of paper towels near the stove. In a heavy skillet, heat oil to 375˚ F. Scoop up a large spoonful of the batter and drop it gently into oil. Within seconds it should puff up by 50 percent or more into a torta or patty. Turn patty at least once to cook evenly and fry until deep golden brown. It will be fragile but crisp. Remove first torta with a slotted spoon and drain on paper towels. Cut into patty to see if it is cooked through but has a melting tenderness. The interior should not be dry. Adjust oil temperature if necessary.

Drop in remaining batter, several large spoonfuls at a time. Don’t crowd tortas as they cook. Repeat until all batter is used. Transfer tortas to a platter or plates and surround with chile sauce. Serve immediately.

Combine chile, onion, and garlic salt in a large, heavy saucepan. Slowly add broth, mixing carefully. Break up any lumps of chile. Cook mixture over medium heat and bring to a boil. Reduce heat to a simmer. Cook for about 20 minutes, stirring occasionally. Stir in cornstarch mixture and cook about 5 minutes more. Completed sauce should be reduced by about one-quarter, coat a spoon thickly, and no longer taste of raw cornstarch. Add more garlic salt if you wish. Serve sauce warm with tortas, enchiladas, burritos, or other dishes.

Ahead-of-time note: Red chile sauce keeps for up to 5 days in the refrigerator. It also freezes well.