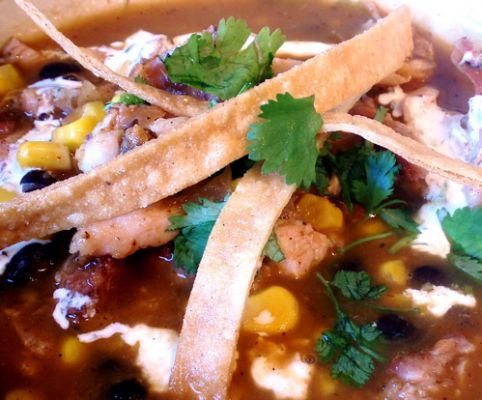 No Video
Serves 6 or so | Prep Time | Cook Time

My daughter told me how much she likes tortilla soup, so I figured I should make some. This recipe was inspired by Guy Fieri but didn't really stick to his recipe.

8 cups chicken stock (not broth) however, I used 3 cups turkey stock that I had on hand and the remaining in chicken broth.
Juice from 2 limes
1 14.5 oz can of black beans, drained and rinsed
1 14.5 oz can of whole corn kernels, drained
1 corn tortilla, cut into strips

Put the tomatoes, jalapeno, onions and 4 whole garlic cloves on a cookie sheet. Drizzle them with olive oil and sprinkle with salt & pepper and about 1/4 teaspoon of cumin. Roast in the oven for about 20 - 30 minutes...you want the veggies the have some of that "I've been roasted" color to them.

Remove from the oven and let cool for a few minutes. Slip the skins off of the tomatoes and put them in a small food processor and give it a little whirl. Set the tomatoes aside for now.

Chop up the onions and jalapeno. If you're a not real good with a lot of heat (like me) then remove the seeds.

Remove the seeds from the chipotle pepper and chop up.

Heat a large, heavy bottom pot over medium-high heat. Add the vegetable oil. Throw in your onion and saute for a couple of minutes. Not much to do there since its cooked already but this will get some flavor in your pot started.

Toss in your aromatics which are the chipotle pepper, Mexican oregano (not in picture), jalapeno, roasted garlic and the remaining 2 minced garlic cloves, chili powder, and cumin. Cook for about 3 minutes, stirring often so as not to burn the mixture.

Deglaze the pot with some of your chicken or turkey liquid, scrapping everything up (there shouldn't be much to deglaze) Pour in the remaining stock and add the tomatoes, lime juice, and tortilla strips. Season with salt and pepper to taste.

Bring to a boil then lower the heat and simmer, uncovered for about 30 minutes.

If you have an emulsion blender....whip that baby out and go to town on the soup....puree it good. Adjust seasoning if necessary. Add the beans and corn and heat through.

Now....take your sliced chicken and put it in the bottom of your bowl. Spoon the soup over the chicken, garnish with suggestions below, and serve.

Now...while the soup is in it's 30 minute simmer mode. break out a good sized sauce pan and put a couple of cups of veggie oil and heat to about 350' F (ummm...i just heated it up until it spit when I added a teeny tiny splash of water). Take about 8 corn tortillas and cut them into strips. In batched, fry them up until golden brown and drain on a paper towel.

Mix together 3/4 cups Mexican Crema, 2 tablespoons silver tequila, zest from one lime and a dash of pepper. Drizzle this yummy stuff over your soup.

Of course there are the other necessities: cheese, tomatoes, avocados, cilantro...it's all good!