Turducken (a Chicken In A Duck In A Turkey) 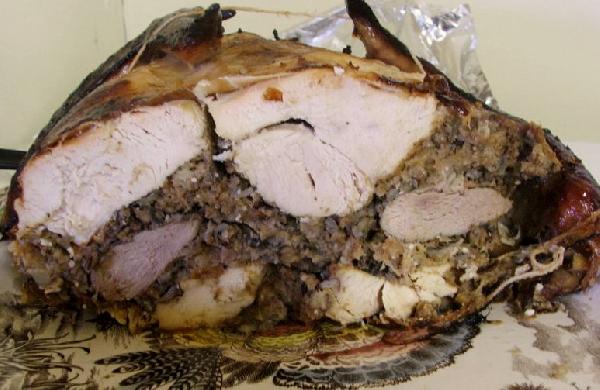 16-20 lbs whole turkey
4-5 lbs whole duckling
3-4 lbs whole chicken (or use a larger chicken and place the duckling inside it)
6-8 cups prepared stuffing (I like to use 2 kinds such as sausage and cornbread stuffing, but use your favorites or just one kind)
2 tablespoons salt
2 tablespoons paprika
1 tablespoon black pepper
1-2 teaspoon dried thyme

2. If it is your first time deboning a fowl, you might want to practice first on the chicken rather than the turkey since mistakes will be hidden inside the bigger birds.

3. Rinse the turkey and remove the neck and any giblets.

4. Place the turkey, breast side down, on a clean flat surface.

5. Cut through the skin along the length of the spine.

6. Using the tip of a knife and starting from the neck end, gently separate meat from rib cage on one side.

7. Toward neck end, cut through the meat to expose the shoulder blade; cut meat away from and around the bone, severing bone at the joint to remove shoulder blade.

8. Disjoint wing between second and third joints. Leave the wing bones and keep the wing attached to the meat.

9. Continue separating meat from frame, working toward the thighbone and being careful to keep the "oyster" (pocket of meat on back) attached to skin, rather than leaving it with the bone.

10. Cut through ball-and-socket joint to release the thighbone from the carcass (bird will be open on one side). Keep the leg attached to the meat.

11. Repeat boning procedure on the other side of the bird.

12. Carefully remove the carcass and use it to make stock for your gravy and stuffing. To make stock, put the turkey carcass in a large pot and cover with water. Bring to a boil, then simmer on low heat. You can also place it in a large crock pot.

13. You should end up with a flat boneless (except for wings and legs) turkey with the skin intact in one large piece. Put the boned turkey in a large dish or bowl and cover with plastic wrap to keep it from drying out. Place it in the refrigerator.

14. Repeat the deboning process on the duckling and the chicken, but debone both stumps of wings and leg drumsticks. Cut through flesh at the thinnest point and trim around these bones with a knife until they can be removed. (Since they have little meat, you can cut off the entire wings and add them to the stock pot.) Both the chicken and duck will be stuffed inside the turkey and need not be kept "perfectly" intact.

15. Trim excess skin and fat from the birds. Ducks, in particular, have a lot of excess fatty skin that should be saved to render fat to be used later for making gravy. You can completely remove the skin from the chicken, but keep some duck skin which adds flavor.

17. Mix together the seasonings in a small dish.

18. Spread the turkey, skin down, on flat surface, exposing as much meat as possible.

20. Spread some of stuffing over the turkey in an even layer approximately 3/4 inch thick.

22. Season exposed duck meat with about 1 tablespoons of seasoning mix.

23. Spread more stuffing in an even layer (about 1/2 inch thick) over the duck.

24. Arrange the chicken, skin down, evenly on top of the stuffing.

26. Spread remainder of your stuffing on top of chicken.

29. Since the turducken has no skeleton, it must be trussed up or it may fall apart in cooking.

30. Tie 4-5 pieces of cotton string around the bird, widthwise to act as skeletal support.

31. Turn the bird over and place in a roasting rack inside a large roasting pan so it is breast side up and looks like a "normal" turkey.

32. Tie the legs together just above the tip bones.

35. Place the bird in the center of the oven and bake until a meat thermometer inserted through to center reads 165 degrees, approximately 9 hours, though cooking times will vary depending on the size of the birds and amount of stuffing used. Rely on temperature and not time cooked for doneness.

36. There will be no need to baste, but accumulated drippings may need to be removed from the pan every few hours so that the lower portion does not deep fry in the hot oil. Save pan drippings for gravy.

37. Remove the turducken from the oven and let cool in the pan for an hour before serving. Make gravy according to your favorite recipe.

38. To serve cut bird in half. Carve crosswise so each slice reveals all 3 meats and stuffings.

janko
I finally found this, thanks!
londa2897
HI Karen - I have always wondered how this was made. Thanks for posting - good job on directions too!