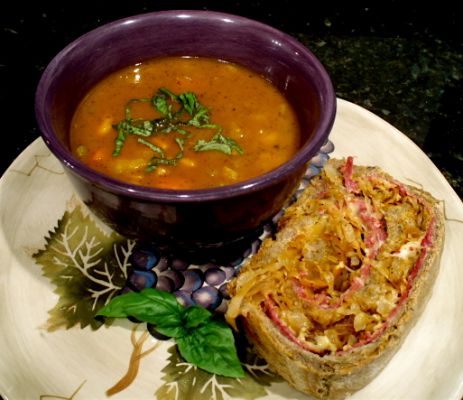 This is a fabulous, hearty Irish soup recipe that I found in the L.A.Times Food Section. When I made it, I halved the recipe since it serves an army and well, I didn't have an army to serve.

In a large, heavy bottom pot, melt the butter over medium heat. Add the potatoes, leek and all but 2 cups each of the onion and celery. Cook until just tender and the onion begin to color, stirring often. This should take about 15 minutes or less.

Stir in both the canned and plum tomatoes along with the brown sugar....crushing the tomatoes as best you can.

Add in the oregano, basil and vegetable broth, scraping up any bits from the bottom. Bring to a boil then reduce to a simmer. Cover the pan loosely....and simmer for about 45 minutes, until the veggies are very tender and the soup begins to thicken.

Remove from heat and with an immersion blender, puree the contents. If you don't have an immersion blender, use your regular blender, in smallish batches....being careful not to over fill the blender which would allow it to "explode" from the heat (not a good thing). Season with salt and pepper to taste.

Stir in the remaining onions and celery along with the carrots and fennel. Simmer gently until the veggies are nice and tender (to your liking). About 20 - 30 minutes...more if you desire of course.

Add the beans and continue cooking until heated through. If you want the beans to be softer....by all means, simmer some more.

And there you have a fabulous, hearty, tasty Irish soup