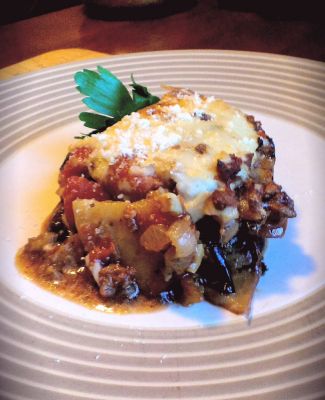 So many delicious layers of flavour in this dish. Often referred to as a "Greek Lasagne", this dish is layered with roasted potatoes & eggplant and a thin, creamy layer of Bechamel.

Lay the sliced eggplant in one layer on a baking sheet that has been sprayed with EVOO / Baking spray. Drizzle with EVOO and season with sea salt and black pepper.

Same goes for the potatoes, drizzle and season with sea salt and pepper as well as add a ½ tsp. dried Oregano.

In a large frying pan, bring to temperature on medium and pour in the oil. Add the onions, garlic, and a pinch of sea salt. Fry 4 – 5 minutes stirring often.

Add the veggie ground and break it up to a crumbly texture. Mix together with the onion and garlic and continue frying on medium 3 minutes.

Stir in the tomato paste followed by the diced tomatoes, nutmeg, red wine vinegar, oregano, thyme, and sea salt / black pepper. Bring to a boil on medium and reduce to medium low. Cover and simmer 15 Minutes.

Stir in the fresh parsley and spinach, reduce heat to low, and leave covered.

In a small sauce pot, melt the butter on medium and whisk in the flour. Continuously stir the mixture so nothing burns. After 2 minutes of stirring, slowly whisk in the milk to break up any potential clumps. Bring to a boil stirring often. Season and reduce heat to low for 5 minutes.

Spray a 2 ½ qt. baking dish with EVOO spray and begin lining the dish with the cooled, roasted eggplant. Follow with a layer of the roasted potatoes and a layer of the hearty sauce. Sprinkle with parmesan and complete another eggplant, potato, sauce & parmesan layer.

**Seal the remainder of sauce in an airtight container and refrigerate / freeze for future use!

Drizzle the Béchamel sauce through the middle of the dish from end to end. Use a spoon or spatula to gently press the Béchamel away from the middle towards the edges. Sprinkle with the remainder of the parmesan and bake uncovered 25 – 30 Minutes.

Cool 5 minutes before slicing in to it and serving.