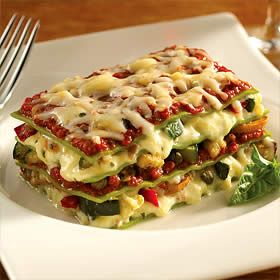 This was originally potato soup that my dad would make. I thought the roux base would lend itself well to a white sauce lasagna. I was right.

melt butter in a large pot

Add flour, mix until it's well combined. It should be a crumbly paste.

Slowly add the half and half, whisking as you go so it doesn't clump.

As it cooks, stir to keep stuff from sticking to the bottom of the pan.

Season to taste. Keep tasting to keep from over or under salting.

Keep layering until the noodles are all used or you run out of space in the pan.

Bake at 350 for about half an hour or until the cheese is well melted.

Sometimes I make it with other noodles- bowties or rotini. If you're doing that, just mix the noodles and sauce all together and layer the noodles/sauce, then dollops of cottage cheese, then shredded cheese- keep layering until you run out of stuff or room in the pan.