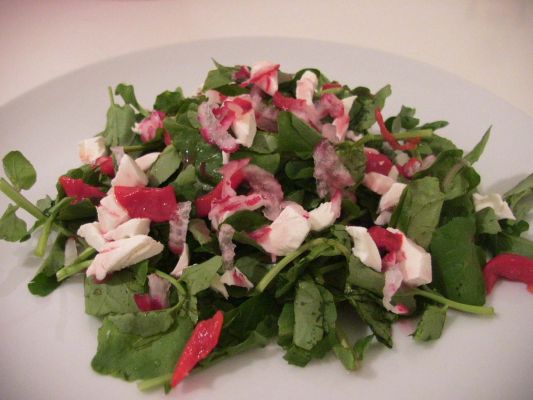 One year ago today, I had never tasted watercress.

I had no idea how empty my life was without watercress.

If you don't know what it is---it's a green. A lettuce. Well, not exactly a lettuce. It's a small bunch of greens that resembles a bunch of fresh basil---but tastes nothing like it. It's amazing good for you. New research is starting to show that it's particularly healthy for the lungs and is a powerful antioxidant. It's also extremely tasty. Has a bit of a spicy, radish-y bite. I think it goes particularly well with sweet dressings. I played with watercress quite a bit before I came up with a salad that just makes me jump up and down. And when does lettuce get anyone up in the air?

It's a great blend of spicy zip, lots of flavor, a bit of heft with the cheese, and a great balance of flavors with the blueberry vinaigrette, which really ups the antioxidants in the salad. It also looks SO pretty!

1. If you don't already have roasted red peppers in your icebox---now's the time. Sure, you can use the ones in the jar---but the fresh are SO much better. Simply wash some red peppers and put them on a baking dish in the oven at 400 degrees. Turn them once or twice to get an even browning. When they get a nice combination of red and black color, they're done. Let them cool and then scrape out the seeds and peel off the skins. If you want to save some for later, put them in a sealable container and sprinkle with a bit of olive oil. They will keep in the icebox for a few days.

2. Now it gets easy. Wash the watercress under cold water. I use a pair of kitchen shears to trim off the stem ends a bit.

3. Cut the red peppers into small bite-sized pieces, chop the fresh mozzarella into bite sized pieces, and grate a few radishes. Scatter these babies all over the salad. Make it look pretty!

4. For the dressing, simply drop a hand full of blueberries, some pear infused vinegar, some olive oil, salt and pepper into a blender and let it go on medium speed for a few seconds.

5. Pour dressing over the salad and enjoy!