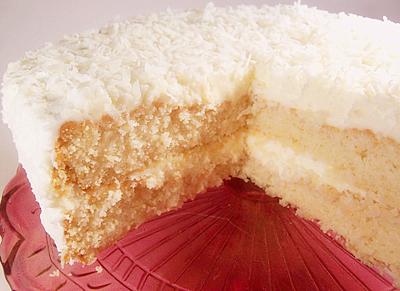 To make the cake: Place one baking rack one-third from the bottom of the oven and the second two-thirds from the bottom. Preheat the oven to 350-f degrees. Line three 9-inch cake pans with parchment paper rounds, grease with butter, and dust with flour (or spray with Pam with Flour).

Spoon the batter evenly into the prepared cake pans. Stagger the cake layers on the oven racks so that no layer is directly over another. Set two layers on one rack and the third on the other. Bake for 25 to 35 minutes, until a toothpick inserted into the middle of the cakes comes out clean and tops are flat and browned. Monitor the layers carefully for doneness; each one me be done at a different time.

Set the cake pans on racks to cool for 10 minutes. Invert the cakes onto the racks and cool completely before frosting. At this point the cakes can be tightly wrapped in a layer of plastic wrap and a layer of aluminum foil and frozen up to 3 weeks.

To Make the Buttercream: Using a mixer fitted with a whisk attachment, whip the eggs and yolks in a large bowl on high speed about 5 minutes. In a medium saucepan, combine the water and sugar; simmer until it reaches the soft-ball stage, registering between 234-f degrees and 240-f degrees on a candy thermometer. Immediately transfer the syrup to a large heatproof liquid measuring cup. In a slow, thin stream, add the sugar mixture to the egg mixture, mixing on low speed the entire time. Increase the speed to medium and beat about 7 minutes, until the syrup has cooled (the bowl should be barely warm to the touch). Add the butter, half a stick at a time, beating on medium speed about 20 seconds after each addition. Once all of the butter has been added, beat on medium until the frosting thickens slightly, about 3 minutes. Stir in the salt and whiskey.

Sweet Variations: Instead of whiskey try substituting Grand Marnier or Amaretto. For chocolate-flavored buttercream, substitute 8 oz. of melted bittersweet chocolate for the Jack Daniel\'s. Make sure to cool the melted chocolate for at least 15 minutes before adding it to the buttercream.

Natasha_M
Hi. The sugar mentioned under cake and frosting ingredients is whole sugar or powdered?
belledoty
I made this cake minus the "special" frosting for a graduation. It was so moist and delicious! Everyone loved it! I added 1/2 tsp. almond extract to the batter for a little different taste. Great recipe!
lamonkeygirl
Do you really use three cups of butter for the frosting? That's six sticks of butter.