By moogie
Member since 2010 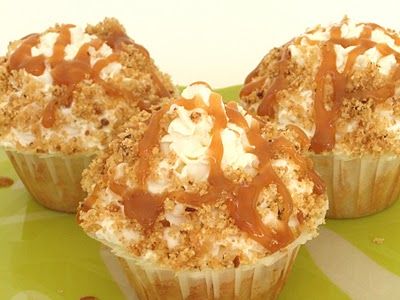 1. Place all ingredients in food processor bowl or blender and process to combine. Pour mixture into a saucepan over medium heat and cook until mixture starts to bubble, making sure to constantly whisk. Continue to cook mixture until it thickens, about 5 – 7 minutes. Remove from heat and let cool slightly.

1. Place whip cream, sugar and vanilla in a chilled bowl. Using a whisk or a hand mixer beat whip cream on low until it starts to bubble. Increase speed to medium high and continue to beat until cream almost doubles in size and is smooth and creamy.

1. Place graham cracker crumbs, toasted coconut shreds, toasted pecans and sugar in a food processor bowl and pulse to crumble. Alternatively, you can place all ingredients in a baggie use a rolling pin to crumble the mixture. Add melted butter and mix to combine.

1. Using a serrated melon baller or knife, dig out a well in the middle of each cupcake and fill with banana cream filling. Frost with whip cream to preference. Rim frosting with coconut and pecan graham cracker mixture by placing crumbs in your hand and pressing it into the sides. Finish by drizzling caramel sauce on top