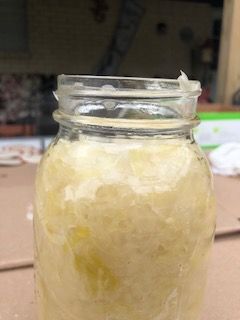 I received this recipe from my grandmother, Pelagia (Pearl) Kubiak Bielamowicz who received it from her mother, Stanislawa (Stella) Szymanski Kubiak (both from Bremond, the largest Polish settlement in Texas). Doubtless it was passed through many generations but I want to give them the credit. They were dear Polish women who made many jars of kraut every year and freely gave it to our very large family. I wanted this recipe to live on and keep the tradition of homemade sauerkraut alive so I freely share the recipe. If you want to know why to make your own sauerkraut instead of buying it in a can, think of the difference between a tomato you pick from the garden and eat on the spot versus one you buy from the store, it’s that dramatic (I have known many people who did not like sauerkraut but when they tasted this, they actually bought jars of it from me annually). It was necessary for me to add my own refinements over the years but these years have perfected the recipe.

Make sure everything is clean. This is crucial.

Boil some water that has 1.5 tablespoons of salt per quart. Let the water cool to room temperature. Boil about 1 gallon per bucket of kraut. Yes, that’s a lot of salt but sauerkraut has no vinegar as many people think. It is fermented cabbage and is chock full of antioxidants! You will use a lot of salt in this recipe so go and buy a box. It’s cheap

Select the largest heads of cabbage you can find (preferably 10 pounds or better, smaller if you can’t find it. My last batch was 4 pound heads so don’t get hung up on it). Throw away all of the thick green leaves. Keep light green and lighter (to white) cabbage. After stripping the dark leaves, cut the cabbage heads into sections, discarding the cores.

Shred the cabbage, slice about the thickness of a quarter or a little larger (weigh out 5 pounds of shredded cabbage at a time). Rinse the cabbage thoroughly after slicing and weighing. This year I bought a cabbage slicer which made the job much easier than using a knife.

Work with 5 pounds shredded cabbage at a time (weigh it). Dump in sink (make sure it doesn’t go down the drain. Cabbage is brutal on a garbage disposal and clogs the pipes quickly and easily). Rinse thoroughly and drain.

In a large plastic pan, spread the cabbage.
Sprinkle 2 tablespoons of salt (yes, that’s a lot of salt but this recipe uses less than one I used before).
Mix the salt and cabbage thoroughly.

After about 10 minutes, roll it around again.
After about 10 more minutes, put the cabbage and water that was drawn out in a 5 gallon plastic bucket (don’t use metal). Pack the cabbage in the bucket tightly with your fist.
Continue until all of the cabbage is packed in the bucket. Repeat this process until the bucket is about half full or a little more then start on the next bucket if you have that much. Leave about 10 inches minimum from the top. More if you can afford it. It’s better to use 2 buckets than to put too much in one. Half full is best.

Place a plate (plastic or ceramic) over the cabbage. Put a weight on top of it (I use a quart jar full of water). Push the plate all the way down and try to cover it with the cabbage water.

Keep in a controlled temperature place (70 – 90 degrees). I use the garage. Skim off any floating cabbage. Not a good idea to ferment the cabbage in the house unless you want the house to smell like fermenting cabbage. It’s best to do this in the March/April timeframe for the best garage temperatures. Keep in mind that I live in Texas.

Cabbage ferments best in the temperature range shown. If it’s hotter the kraut will lose crunch. If cooler it will take longer to ferment. Cover the buckets.

While the cabbage ferments, it will release gas. Often, this gas gets trapped under the cabbage and must be released. Use a wooden stick and punch holes and push the cabbage to the bottom of the bucket. (It is not necessary to stir). Daily, mash down on the plate and weight to force the gas out. Skim the mold daily. (mold forms naturally but this is totally normal.) Any cabbage that floats will likely mold. Just skim it off. It is normal to have to remove the plate and weight to punch the holes. The reason to not put more than half the capacity of the bucket in cabbage is that the stuff will try to crawl out of the bucket if too much gas gets in there. Later, during the fermenting process, it may seem like there’s not enough water. Feel free to add some (plain tap water, not necessary to salt this) to make sure the cabbage stays covered at least 4 inches in water. This makes the skimming process easier as well.

Let the cabbage ferment for 4-6 weeks. If the gas has stopped sooner, wait another week. Let it ferment until it quits releasing gas. The more gas, the more sour the kraut will be. This is a matter of how much natural sugar is in the cabbage. It is perfectly safe to taste the fermenting cabbage to see how sour it will be. You cannot make it more or less sour because the sugar content of the cabbage determines that.

When the fermenting process is done, in a large pot, put the kraut and all of the water from a single bucket. If you have 2 buckets, use only one at a time. (I use a turkey fryer for this procedure. Do this outside so it won’t stink up the house.) Bring the kraut to a rolling boil. Let boil for 10 minutes. Have your jars clean and ready. You can add water to the pot if needed. I run the jars through the dishwasher the day before canning. Inspect your jars. If there are any chips, scratches, or cracks, discard that jar and use a different one. If you put the hot kraut in a jar that has chips, scratches, or cracks, it will break the jar.

Pack the boiling kraut (you can take it off the fire before doing this) into jars. Make sure that you leave plenty of water in the jar from the pot. It can be deceiving as the water settles and could leave the top of the kraut dry. If this happens, turn the jars over from time to time to coat the top with water during storage. The best method (for me, at least) is to use a set of grill tongs. Reach into the pot and grab a wad of kraut. Do not drain but push the dripping kraut into the jar. You will need to be holding the jar in the other hand. The other hand should have a thick leather glove on it because this stuff is going to be really hot! Pack (push down on the kraut in the jars to pack) the kraut into the jar. Pressure is good. Leave 1 to 2 inches from the top of the jar and fill the jar with the water from the pot covering the kraut at least 1 inch. Wipe any excess kraut and water from the top of the jar. Immediately seal. As you get closer to the bottom of the pot you will have to pour out some of the water or it will take all day to get it canned.

Do not let the kraut cool before putting in jars. It needs to be very hot.
Try to avoid getting any of your melting skin in the jars. As the canned sauerkraut begins to cool you will hear occasional popping. This is the lid sealing to the jar and is expected.

When the jars cool, use a wet cloth and clean the jars. DO NOT put anything cold or even cool on the hot jars. It will make the jars break!

The kraut is better if you let it sit in the jars on a shelf for about 2 weeks or longer before using.