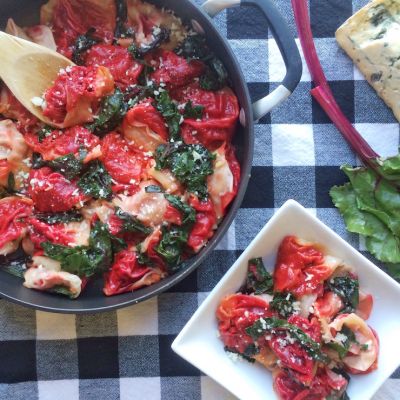 Cooking is a labor of love. Easy, quick recipes are great, but it can be so therapeutic to spend hours in your kitchen putting your heart and soul into a dish. Put on some music and pour yourself a glass of wine, and eventually you’ll lose yourself in what you’re doing. This is what I mean when I say that bliss can be found in the kitchen.

Nothing embodies cooking being a labor of love more than homemade stuffed pasta. With today being Valentine’s Day, I found it an appropriate choice for this week’s recipe. Making it requires patience, mindfulness, and TLC – three qualities of tremendous importance both inside and outside of the kitchen. If we all approached ourselves and our relationships the way we approached homemade tortelloni, the world would be a better place.

I took a shortcut and used wonton wrappers instead of making my own pasta dough, which is a trick I learned from my great grandmother. You can usually find them in the grocery store next to the tofu.

I chose a beet filling because it’s something you don’t see very often, and the red-purple color it creates is awe-inspiring. For the cheeses I used bleu d’auvergne, a French bleu cheese that’s buttery and pungent but less salty than other bleu cheeses, as well as some pecorino romano. You can use any bleu cheese you’d like, but I’d recommend asking your cheese monger for one that’s creamy and on the less salty side.

When preparing the beets, be sure not to throw away the leafy greens. Yes, they're edible, and they’re fantastic. You can use them like you would any other leafy green. They taste very similar to Swiss chard. For this recipe I sautéed them with some garlic and olive oil, added some butter, and tossed them with the cooked tortelloni.

This recipe would be a lot of fun to make with friends, family, or a significant other, in addition to cutting down the preparation time. There’s no shame in making them yourself though!

Bring a large pot of water to a boil. Cut the tops off of the beets and remove the greens from their thick stems. Chop the greens and set them aside.

Boil the beets until fork-tender, about 45 minutes. Drain them, then peel off their skins using your hands under cold running water.

Cut one of the beets into chunks and set the others aside for another use. In a food processor, add the chopped beet, bleu cheese, pecorino romano, and egg. Pulse until pureed.

Spoon about two teaspoons of the filling onto one of wonton wrappers.

Brush all 4 sides with water.

Fold one corner over to the opposite corner, creating a triangle shape.

Seal the edges together with a fork.

Pinch the two bottom corners together using your thumb and index finger.

Sit it up and fold down the top corner, and you’ve made your first one!

After about 45 minutes, I had cranked out 34 of these beauties. I botched one of them and I was pretty generous with the filling, so you may end up with more than 34. Don’t stress if they’re not perfect.

Bring a large pot of water to a boil for the tortelloni. In the meantime, in a large sauté pan, heat the olive oil over medium-high heat. Add the garlic and beet greens and sauté until wilted.