the vegan pot pie made of WIN 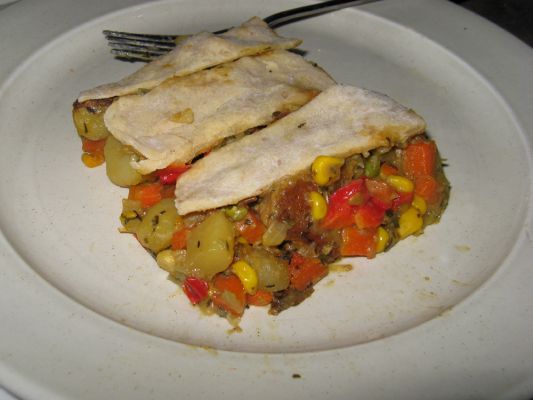 Vegetarian Times' "No Roll Pie Crust," which doesn't work so well when you need it as a top crust rather than a bottom crust.

Lots of experimenting over 2 or 3 years to get this the way I wanted it.

Saute the onion in a large pot until it turns translucent.

Add the potatoes and cook on medium heat, stirring, for 5 minutes.

Add the rest of the veggies, garlic, spices, bay leaves, and bouillon.

Cover the pot and cook for 30 minutes, stirring as needed.

Provided you stir it enough to prevent it burning, the filling shouldn't need water, but you can add 1/2 C. water if you'd like (the water will just mix with the gravy later to make it thinner).

In a small pan, combine the ingredients for the gravy and let simmer, stirring occasionally, until the gravy thickens and forms a skin.

Turn off the heat but continue stirring periodically to prevent the gravy from setting.

Put the chopped seitan into a sealable container with the corn starch.

Shake the container until the seitan is evenly coated, then saute it in a small skillet until it turns golden but not yet crispy.

Pour the filling in over the seitan, spreading it around to make an even surface.

Pour the gravy in on top of it.

In a food processor combine the flour, sesame seeds, margarine, and vinegar.

Run the processor to blend it together, then add the first tablespoon of water.

While running the food processor continue adding water slowly, a tablespoon at a time, until the crust sticks together and separates from the walls in a single large clump.

Lightly flour a rolling surface and the top of the crust.

If you've got the skills to transfer this onto the pot pie without tearing it, feel free; else you may want to cut the crust into strips and lay them on top of the pot pie close together.

Bake for 30 minutes at 350, until the crust turns golden or you tire of waiting.